Yep, you read that right.

It turns out I have 4,167 noise-makers in my head, one for every meter ascended to reach 4,167—the number that will forever be etched in my math-averse brain because that is (currently) officially the highest I’ve ever stood on earth.

On the last morning of April, I found myself standing—okay, sitting on rocks and greedily inhaling a canister of Pringles—at 13,671 feet above sea level, on the summit of J’bel Toubkal, Morocco’s highest peak and the highest in North Africa. It took two days of 12-hour acclimatization hikes, a freezing five-hour ascent to Toubkal’s snow-capped summit from the Mountain Refuge, and a lot of internal cursing and bargaining and exhausting all the favorite music albums in my head before my mind finally found peace and quiet as I gazed in wonder at the 360-view that surrounded me.

The stunning, snow-sprinkled summits of the High Atlas mountains. 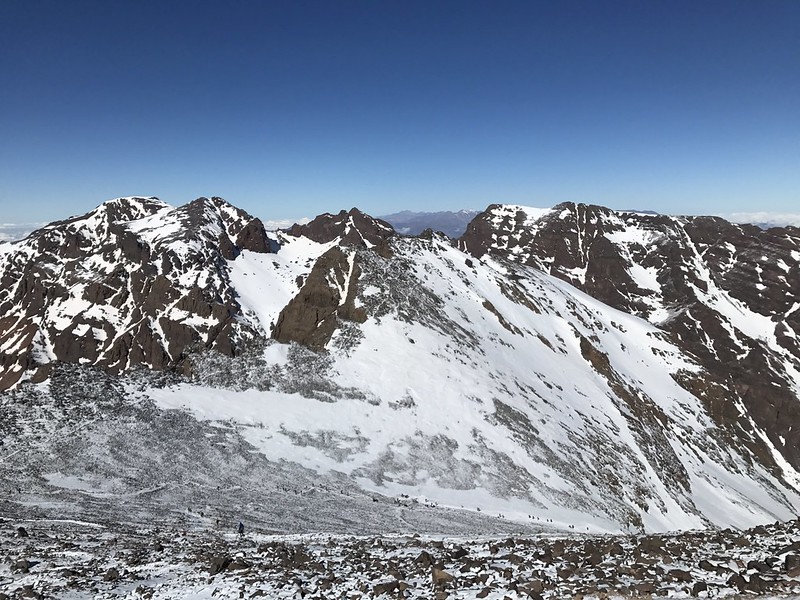 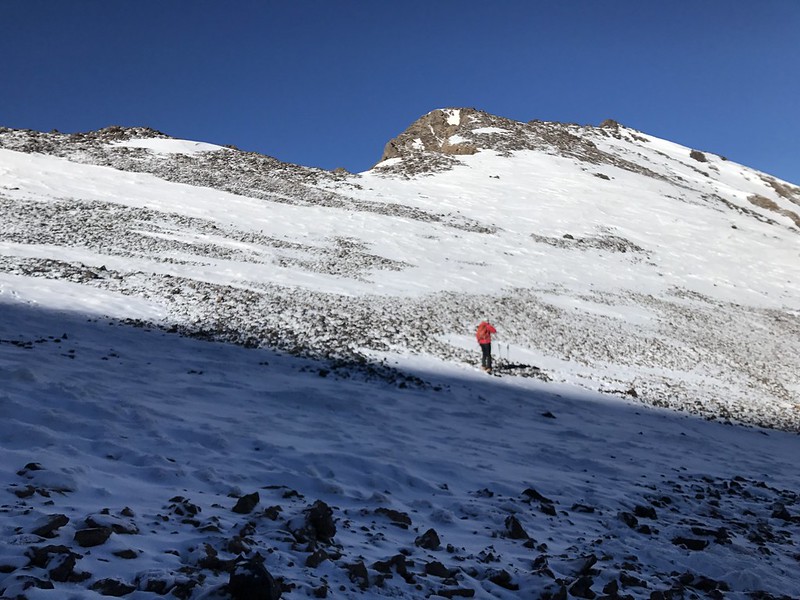 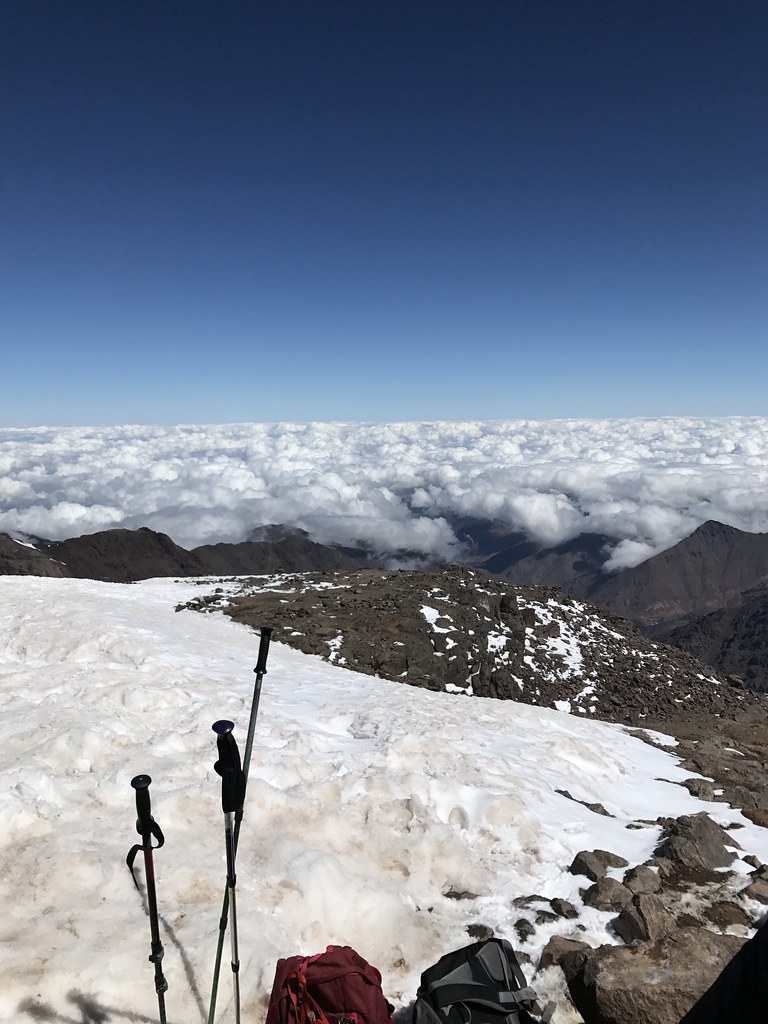 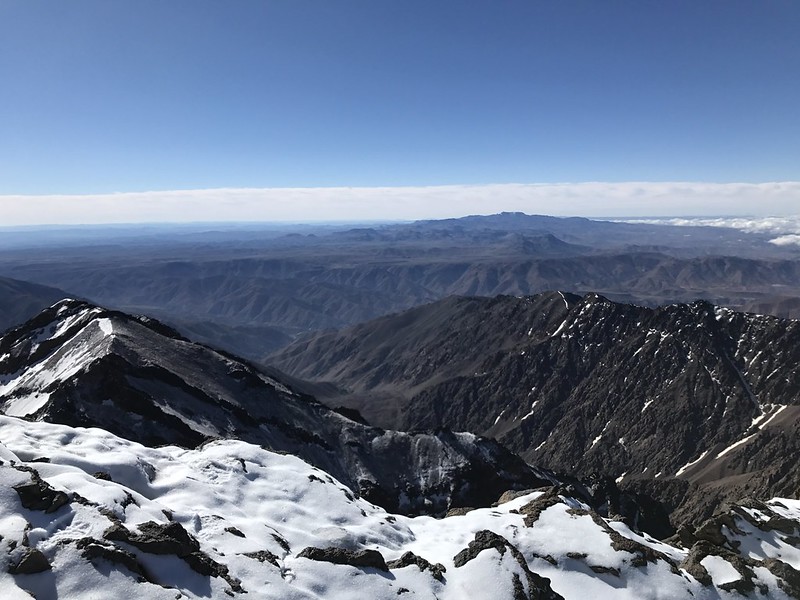 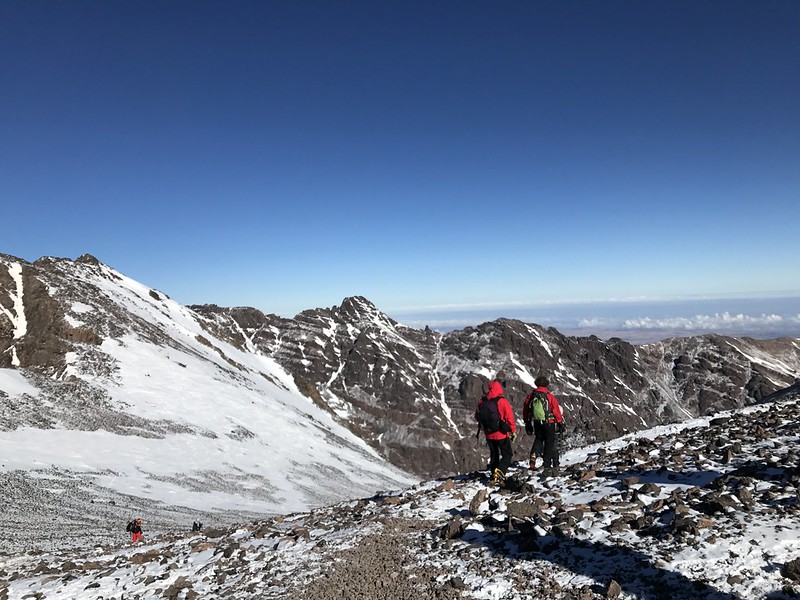 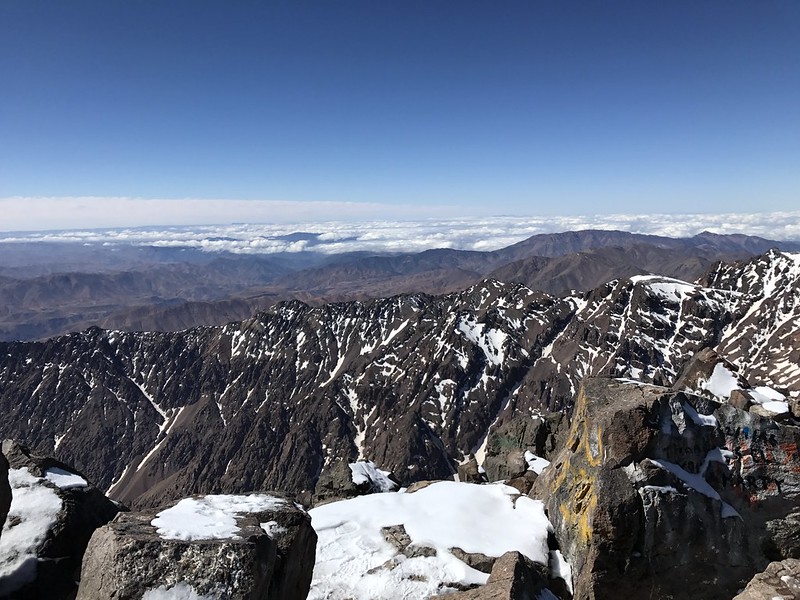 When my plane from Casablanca was about to land in Marrakech, I had seen Toubkal from the window. She looked so intimidating, even more so when I saw the peak from Imlil, the small Moroccan village where the trek began.

What the hell did you get yourself into, you crazy woman?!

That was the first voice. And, for the next three days, the loudest and most consistent.

Eventually the others came, each tinged with emotion that ranged from awe to aggravation, giddiness to desperation, tranquil to terrified. That last one springing up when I found myself holding on for dear life to a wall of snow, rocky ravine below me, and stopping a good 10 minutes later when a hiker finally hoisted me out of my precarious position. My life pretty much flashed before my eyes when he told me to let go of the wall and grab his hand. I don’t think I’ll ever forget that stranger’s face, as well as the immense feelings of relief and gratitude that rushed through me when I finally stood on stable ground. From then on, operating on autopilot, I followed the same path the hikers did, walking faster than usual because another voice was telling me to always have somebody within my line of sight.

And then there she was—rather, it: the triangular metal structure that marked 4,167. 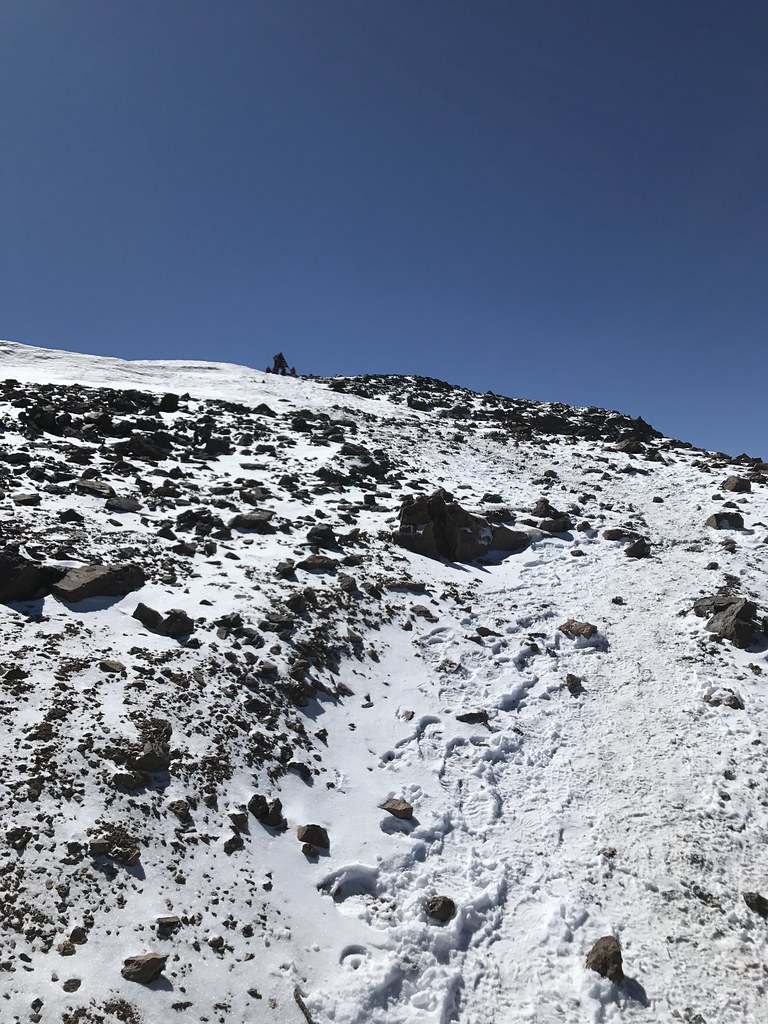 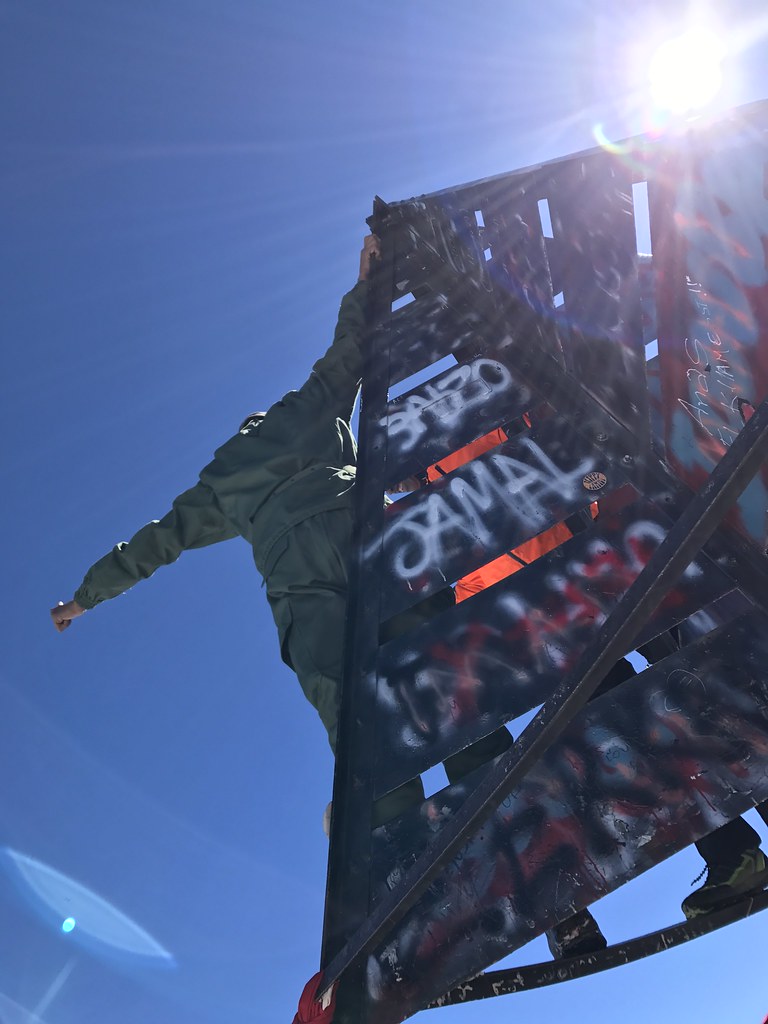 I was pretty much in a daze by then, gazing at the triangle as it grew bigger and bigger, thinking I was seeing an oasis in the desert, which was coincidentally where I was headed the following day. A festive mood awaited me in the triangle—hikers taking selfies and group photos, somebody recording a video, one guy hanging upside-down from one side of the triangle, a couple sitting quietly on one corner, contented smiles on their faces.

It wasn’t until the guy with the red jacket whom I had encountered several times on the way up, walked toward me, grabbed me by the shoulders, and told me, sporting the same crazy smile that I was sporting, he knew he’d see me again at the peak, that I realized I’d actually done it! The Impossible! Four thousand, one hundred and sixty-fucking-seven! And also OMG this guy is really cute! Haha.

It was, as my friend Paula would say, a bottle-worthy moment. One I just opened up again, sending ripples of joy on an ordinary Thursday. :) 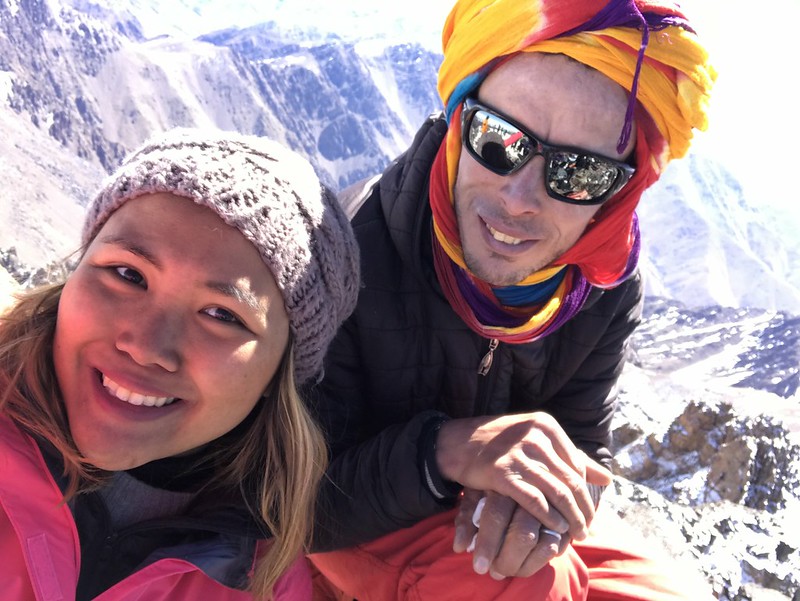 As I would discover later, the day’s bottle-worthy moment was really just the first of plenty. Toubkal had a few more in store, and they weren’t necessarily all happy.

People who travel to Morocco say Marrakech is sensory overload, but it has nothing on J’Bel Toubkal. There, I had the highest and lowest points of my month-long trip. From attempting to slide down a snow slope that ended up with me rolling down the hill, ass and hands and ego bruised, to experiencing the kindness of the Berber people and fellow hikers when they saw me huddled in a corner at a roadside cafe, teeth chattering from the cold, offering tea, gloves, a bandaid because I cut my finger accidentally, and a thick blanket because all my clothes were wet…I swear, Toubkal seriously reawakened the crybaby in me. I felt like I had been thrown into a blender, and if it weren’t for the kindness of strangers—special shoutout to my guide Rasheed (in photo)—I’d probably be my own bloody version of ceviche. Time and again during the two-hour mule ride back to Imlil, I’d tear up because #feelingtoomanyfeelings.

Yesterday I read an old article by Eric Weiner, Thin Places, Where We Are Jolted Out of Old Ways Of Seeing The World, and it really brought back memories of that particular day in Morocco. Toubkal was the thinnest of places I’ve been to (read the article). I think I felt all the emotions in the universe in one single day, so raw and unfiltered and, as it turns out, still there, bottled, for me to re-feel as I am writing this.

If I were asked to relive one day of my life—just relive and not change in any way—it would be that day.

It was just such a jarring day—a very VERY good-bad-jarring day to be alive. The suchness! 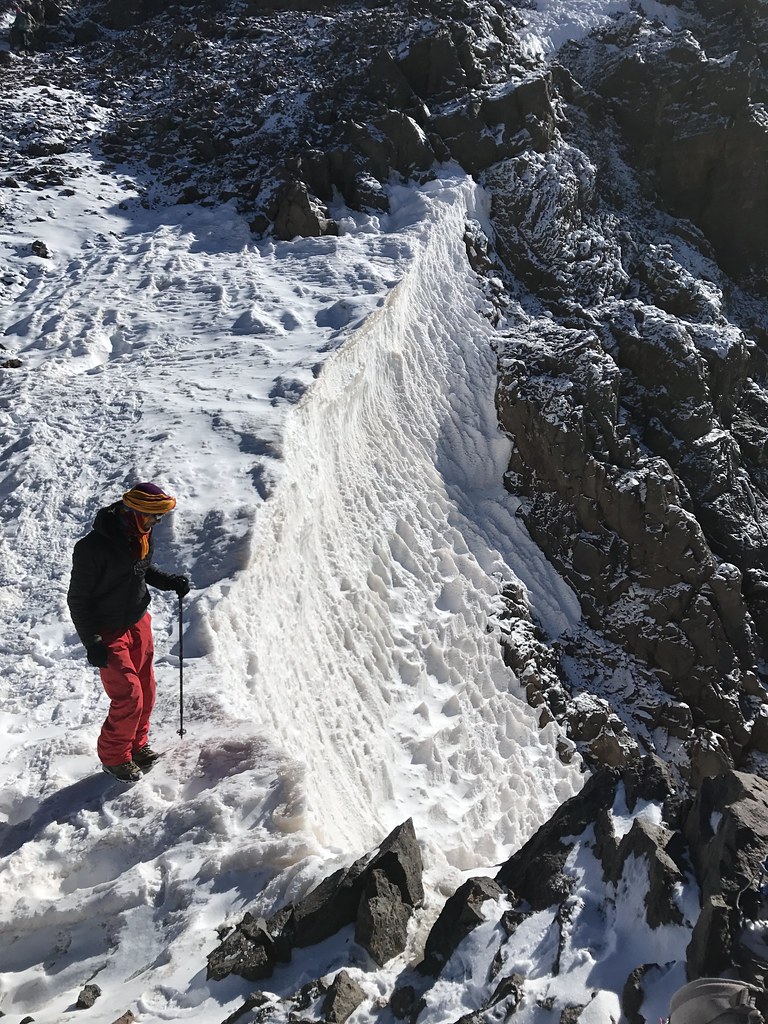 The place was so comfortable in its own skin, so at home with its own nature — its “suchness,” the Buddhists would put it — that I couldn’t help but feel the same way.
—Eric Weiner