Here’s a concept I once thought impossible: being in more than one country in a day.

It turns out all it takes is a three-hour drive from Chiangmai, Thailand, and voila! Three countries in less than 24 hours? Easy peasy.

When I went to Chiangmai this past week, I didn’t really have anything planned beyond joining in on the Loi Krathong festivities and spending a day with the elephants at Baan Chang Elephant Park. I knew I had to visit a temple or two, indulge in a Thai massage, and just consume all the Thai dishes on my must-eat list, but beyond that, I had nothing planned.

So when my sister told me to go on a tour of the Golden Triangle, I welcomed the idea.

For those unaware, the Golden Triangle is an area of around 367,000 square miles that overlaps the mountains of Thailand, Laos and Myanmar. It is one of Asia’s two main opium-producing areas since the 1920s. According to our guide Patty, they no longer produce opium here (…or do they? hehe) but back when the opium trade was in full gear, traders from around the world would meet on the sandbar in the Mekong River where all the transactions took place. 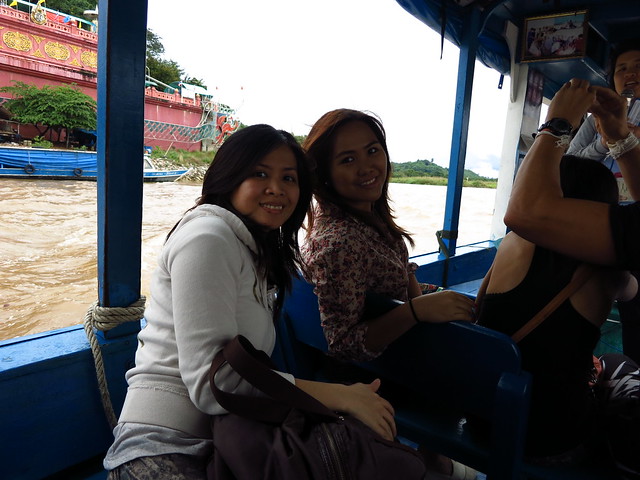 So there I was last Tuesday, embarking on a small ferry from the Thailand side of the triangle, with Myanmar to my left and Laos facing me. The place looked nothing extraordinary. It is a scenery I’ve seen before in my own country—mountain ranges, a brown-colored river, some structures here and there—but I found the very idea of it, the concept of being at a crosspoint where three countries meet, thrilling.

In my future travels, I want to find myself again in similar places. I feel like I’m in the beginning of a treasure hunt now. Haha.

When we finally got off the boat in Laos after an hour of cruising the Mekong river, we were greeted by a man who offered us shots of these interesting-looking spirits:

Usually, I’d feel a little iffy about trying these drinks—I’d suck at Fear Factor because reptiles give me the heebie jeebies—but just as I was about to chicken out, an Aussie traveler looked at me and upon seeing me cringe, he said, “We’re not here everyday so we might as well try it, right?”

Which made a lot of sense! Haha. And so we did. He had a bit of everything, but I wasn’t as adventurous so I settled for a shot of snake whisky:

17 thoughts on “Unexpected: Three countries in three hours…and a shot of snake whisky”