I get really cool assignments on occasion. The other Sunday was especially a treat when I found myself on an exclusive interview with these three culinary gods: 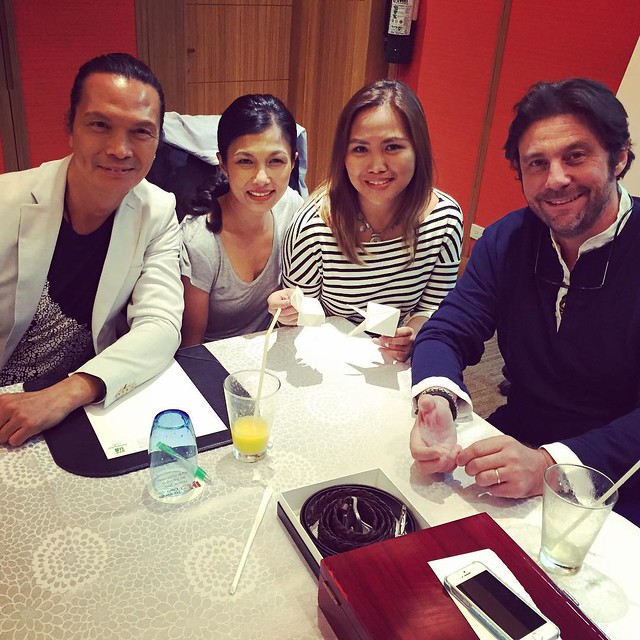 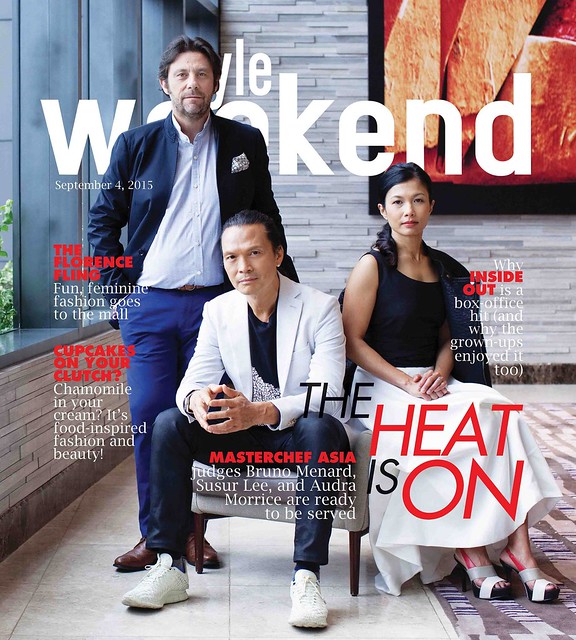 The Juiciest Stakes
Culinary masters reveal what to expect in the first season of MasterChef Asia
By Tricia V. Morente

Last Sunday, in a random conference-room-turned-dressing room at the Holiday Inn & Suites, I found myself in the presence of culinary gods—in various states of undress.

“You know, you are right in front of a love story here,” states three-star Michelin Chef Bruno Menard matter-of-factly. Dusting lint off his freshly pressed Shanghai Tang jacket, the Frenchman—known, among other things, for his culinary achievement at L’Osier, a restaurant opened by luxury cosmetics brand Shiseido in Tokyo—points to himself and the other (currently shirtless) culinary god in the room, chef Susur Lee. A multi-awarded genius whose endless list of stellar credentials include appearances in such shows as Top Chef: Masters and Iron Chef America where he battled it out with chef Bobby Flay over a round of bacon, Lee has been hailed the “Father of Fusion” for his ability to integrate the great diversity of his experience into a culinary style and inventiveness that balances tradition, imagination, and nuance. At that moment, however, Lee was known as the guy asking Menard for a pair of black socks.

“Yes, I have black socks. I have them in my room,” Menard replies. “You trying to come into my room again, Susur?” Clearly used to his friend’s pseudo-innuendos, Lee smirks at Menard and goes back to the business of buttoning his black shirt.

“So you guys share socks,” I couldn’t resist commenting.

“And underwear,” Menard quips, “but we cannot tell you everything. We just met, you know.” Upon hearing this, Lee bursts into laughter and the word “snails” is repeatedly bounced back and forth—“An inside joke,” they explain—and the two go about teasing each other.

It is right in the middle of this chaos that Audra Morrice emerges, clad in a crisp, all-white ensemble, looking very much like a culinary rockstar. Known for being a finalist in MasterChef Australia in 2012, Morrice is in Manila with Menard and Lee to promote the Asian edition of popular culinary competition MasterChef. Looking toward the commotion, Morrice shrugs, obviously used to seeing Menard and Lee fooling around, turns to me, and says, “They are like boys. Seriously.”

Having already finished filming the 15 episodes of MasterChef Asia in Singapore, it’s quite apparent that the three judges are well-attuned to the other’s quirks and habits. Lee and Morrice, for one, are well-acquainted with Menard’s pechant for acquiring…everything under the sun. “You should ask Bruno what he likes to collect,” Lee suggests. “Tell her, Brun.”

Rolling his eyes, Menard accedes. “Certainly very happy to answer this question. There is a story behind this,” he explains. “I love to collect knives—chef’s knives. I always carry three to four knives with me on trips. And I collect guitars. I play the guitar and I have 36 now. I also love watches, and glasses,” he exclaims, taking off the one he is wearing. “I have 40 pairs of glasses. And belts. I’m a collector of collections,” he declares.

As this is happening, Morrice looks toward her fellow judges and, shaking her head with amusement, says: “It’s always like this in the kitchen.”

No Gordon Ramsay in this crew

If the colorful interaction and camaraderie between the three judges is anything to come by, then it’s going to be quite interesting to see the dynamics happening on MasterChef Asia’s very multicultural kitchen. With 15 people competing from eight different countries, all coming from diverse culinary backgrounds and cooking styles, one can easily surmise that the road to finding the first MasterChef Asia winner is bound to encounter a culture clash or two.

But this is not quite so, says Morrice. “Actually all of them became quite good friends in the end. They were very supportive of each other, but also very proud of where they come from,” she shares.

Lee is quick to point out that the Filipino contestants were the most emotional. “They were the first ones who cried, they’d give each other high fives, and you can see in their faces their worries, concerns. They have what I like to call the ‘warrior spirit’. They go all the way—there is no in-between,” he shares.

When MasterChef Asia started filming, the judges were inevitably compared to the original edition hosted by Gordon Ramsay, Joe Bastianich, and Graham Elliot. “There is no Gordon Ramsay in this one,” clarifies Morrice. “We respect how they did the show, but our style is really different. We have our own set of characters and personalities here. Asia is Asia. There are so many different cultures and personal values at play, and as judges, we have to respect the contestants, their religions, beliefs, family values, and why they came on the show.”

It is precisely this diversity that got Menard interested to become a judge on this particular MasterChef. “Asia’s got talent, first of all. And if you talk about cooking, there is so much of the same ingredients everywhere and so many ways to interpret those ingredients with different recipes. It was exciting to see what the contestants came up with,” he says.

Cooking up to be one of the most awaited television events of the season, MasterChef Asia promises episode after episode of thrilling culinary face-offs as the show brings the rich and exotic qualities of Asian cuisine to the fore. Each judge has his/her own opinion on what traits the emerging winner will possess. Says Morrice, “For me, the food has got to look amazing—you eat with your eyes. The dish comes and you gotta wow us with the look. It also has to be delicious without a doubt and it has to represent you, draw out who you are as a cook.”

Good time management is especially key for Menard, who shares that MasterChef Asia’s cooking challenges ran from as quickly as 15 minutes to as long as three hours. “Coming up with something amazing in this amount of time is important. You have the push yourself, think outside the box, and impress us, but also do something you can control. So it’s a balance of all that. And yeah, you have to blow us away! Obviously, we put a lot of pressure on these chefs,” says Menard.

Culling from his extensive background in fusion cuisine, Lee advises contestants to really build on their foundation—the unique culture and tradition surrounding their cuisine. “Your goal as a chef is to be on top of a pyramid, so you need a strong foundation to go up. A lot of the things they will be doing in MasterChef Asia is fusion—and by this I mean innovation. And in order to innovate, you have to first understand the originality of each cuisine. If you don’t know and you just start mixing things, this doesn’t make sense. It’s frou-frou. The food not only has to taste great, but it has to make sense, it has to tell a story—it has to have the roots of the recipe, the culture, and the history,” he says.

At the end of the day, what the judges agree on is that the emerging winner of MasterChef Asia will be the one who is the best listener. “The moment we started episode one, we started mentoring these guys, giving them tips and advice. When they have an issue, they’re presented with three different solutions because us three have our own take on things. The guy who goes through the final is probably the one who listened the best—and has an open mind,” Menard states.

MasterChef Asia premiered on September 3 on the Lifetime Asia channel. Catch it every Thursday at 9 p.m. Replays every Sunday. For more information, go to lifetimeasia.com.

3 thoughts on “The Juiciest Stakes: My morning with the #MasterChefAsia judges”