When I watched Sean Penn’s adaptation of Jon Krakauer’s “Into the Wild,” it greatly appealed to me. I long for the day when I would leave all my responsibilities behind and just spend a year (or two) going where the road will take me.

Of course, unlike Krakauer’s Christopher MacCandless, I’m not quite the extremist. The latter rejects a materialist and conventional life, which prompted him to donate all the money in his college fund to charity, cease communication with his family, and abandon his car in the desert. I, on the other hand, am open to accepting charity (haha), would never cease communication with my family, and would never abandon my car in a desert.

A few years back, I had my own version of being thrown “into the wild.” I was invited to join a Coffee Caravan in Miarayon, Bukidnon, a coffee-producing community in Mindanao. The place is quite remote. It takes more than three hours of travel from Cagayan de Oro to this part of Bukidnon, which wouldn’t be so bad because the view on the way is breathtaking (Bukidnon is home to the world’s biggest pineapple plantation). The only problem was that we had to endure three hours of riding through muddy rough road. By the time we got to our destination, we were all feeling pretty cranky.

But the moment we looked around at the place we were cast off to—a valley between a mountain and a volcano—the view made us forget all about our three-hour ordeal. 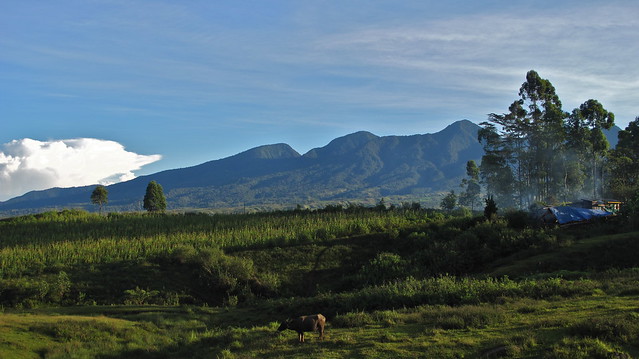 The place is absolutely gorgeous, and the fresh and cool mountain air revitalized our weary spirits.

We also got to witness this amazing sunset upon arrival:

And a double rainbow!

On our first night there, we discovered that people entertain themselves by holding karaoke parties. It was quite weird being in the mountains at night, with only the sound of crickets and “My Way” (in full volume) breaking the silence.

The following morning, we checked out the coffee farms, where our guide informed us that they were encouraging farmers to harvest only when the coffee cherries turn red. It spells the difference between good and bad quality coffee—green is okay if you want instant coffee, but to produce a good brew, you gotta harvest them red. :P

Coffee harvesting wasn’t the only thing we learned that day. One of the more interesting parts of the trip was seeing this group of kids playing an improvised version of pool. Instead of using a huge pool table, they played on a tiny whiteboard. They also used marbles instead of pool balls. Needless to say, they attracted our attention.

These last two photos never fail to bring a smile to my face:

You put kids anywhere in the world and they would always find a way to play :P